Possibilities and attitudes in deaccessioning and disposal in Europe 2008-2017.

This website is one of the outcomes of a one and a half year research on deaccessioning and disposal in the European member states.

The other outcome is the publication Deaccessioning and disposal in Europe 2008-2017. A research on possibilities and attitudes across the European Member States. It is the sequence on the 2008 thesis Deaccessioning on a European level: an opportunity or impossibility (by Dieuwertje Wijsmuller as well) on the same subject, focusing on what extent these possibilities and attitudes have changed over the last 10 years.

It turns out that in the last 10 years, seven countries have adopted (new) legislation on deaccessioning and disposal and the number of countries that have an official guideline on the subject has doubled. With the exception of Austria, all these countries are situated in the Northern part of Europe. The most visible formal changes are seen in the countries inclining towards the Anglo-Saxon tradition of museological practices.

However, this does not mean that in other parts of the European Union no progress has been made. The shifts are only subtler and not yet formalized. Here, the changes are happening on an informal level and the professional attitudes are slowly shifting towards a more positive attitude on deaccessioning and disposal. Even the Latin tradition countries, where the principle of inalienability of museum objects reigns (such as France and Italy), are opening up. Ideas are spreading that disposal will become a necessity, because of the ever-growing collections and thus ever-growing storage space deficits.

This increased awareness of the necessity of practical disposal is how the discourse on deaccessioning and disposal started in the Anglo-Saxon countries as well. These countries have evolved from practical disposal to thinking about deaccessioning and disposal on a curatorial level, an economic level or even on a philosophical level. This yields a new paradigm shift, from the 20th century thinking on collections as the More the Merrier to the 21st century Less is More.

Economically motivated (unethical) disposal however, is still the greatest fear for all museum professionals, shared in all countries. Together with a lack of knowledge and experience, these are three major factors as to why the discourse in most countries is alive, but the practical execution stays behind. The say-do gap is still large.

Looking at the developments, it can be concluded that although the Anglo-Saxon countries are still refining their tools for deaccessioning and disposal, they are tending towards a more conservative attitude through more elaborate guidelines. This is mainly due to the occurrence of a number of high profiled disposals-gone-wrong of the last years. So while the other countries are looking towards the north for knowledge and experience, while adopting a more liberal vision on deaccessioning and disposal, the Anglo-Saxons are taking over the more pensative and conservative Latin school of thought. If this leads to converging traditions on this subject, is something only time will tell.

Please be aware that although all efforts have been made to let the information be as accurate as possible, small errors may have occurred. If you see false information, please contact me at dieuwertje@ccc.co.nl, so I may adjust it. 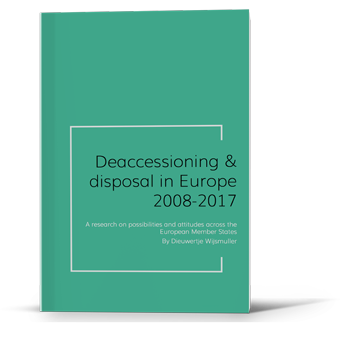